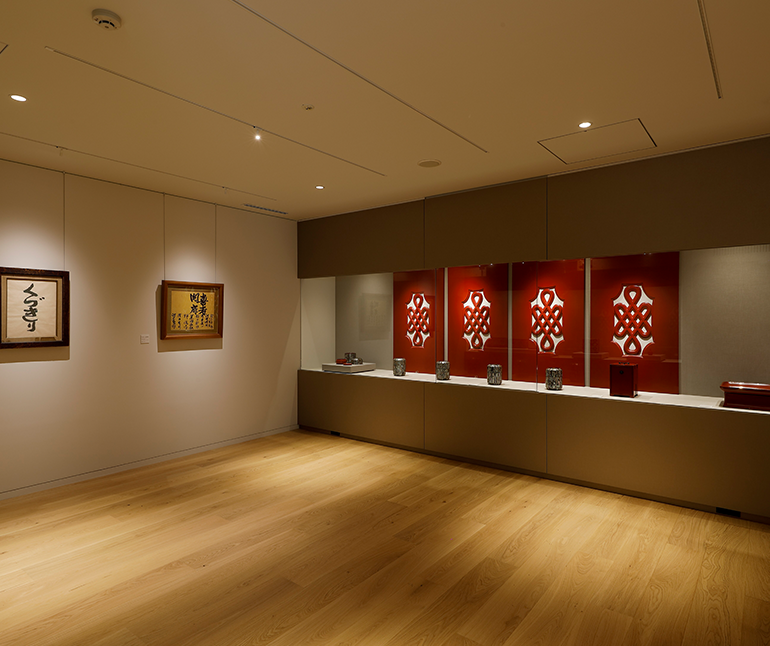 Gion grew from the teahouse district (chayagai) close to the gate to Yasaka Shrine, and eventually went on to gain fame as a leading entertainment quarter (hanamachi) in Kyoto, and throughout Japan, thanks to the Minami-za kabuki theater and other theaters in the area. Since its founding during the Kyoho Period (1716-1736), Kagizen Yoshifusa has enjoyed the patronage of the people of the area, and been frequented by writers, artists, and others with discerning tastes. Kagizen is now opening a small art museum called ZENBI (Kagizen Art Museum) in Gion. The aim of the museum is to share in some small way the blessings we have received from the refined culture of Gion and to continue Kagizen’s role as a local focus where people of culture can gather.

In the early Showa Period (1926-1989), Zenzo Imanishi, the head of the Kagizen family business at the time, developed close ties with persons of culture and artists through various cultural activities. He found a kindred spirit in one in particular, the woodworker and lacquerware artist Tatsuaki Kuroda, who was around the same age. Zenzo was enthralled by Kuroda’s work, and I was told that he planned to have Kuroda redesign the interior of Kagizen. Details of these plans are not known today because Zenzo died prematurely, but many items representative of Kuroda’s subsequent work do survive, including two large display cabinets and raden inlay bowls for kuzukiri noodles. After World War II, Zenzo’s appreciation of Kuroda’s work was taken up by his sister, Aiko Suzuki, and her daughter Haruko Imanishi, who took over the Kagizen family business. The store has prospered after its reopening thanks to Tatsuaki Kuroda, Kanjiro Kawai and other members of the Mingei movement, numerous persons of culture, and, most of all, each of the patrons of Kagizen.

Afterwards, when Tomoo Imanishi, my predecessor in charge of Kagizen, renovated the building, giving it a modern, yet still traditional new look, he retained Kuroda’s aka-urushi (vermillion) takaramusubimon motif screen as the background to the display window, and placed the two large display cabinets facing each other. That is the arrangement originally envisioned by Zenzo for the cabinets, and his inspiration continues to greet many customers to this day.

As the current head of Kagizen, I also inherited Zenzo’s sentiments, and, in 2012, I created ZEN CAFE, a quiet, sophisticated space where art can be appreciated in a relaxed setting in Gion-machi Minamigawa. Recently, we decided to rebuild Space Kagiya, the venue created by my predecessor for young artists to exhibit their work on the opposite side of the street, and to turn the new space into an art museum. We want the museum to become a venue for presenting the world of superb kogei craftsmanship, with a particular focus on the works of Tatsuaki Kuroda, as well as for disseminating the distinctive culture of Kyoto and passing down the artistic beauty found in everyday life to future generations. Most of all, we hope it will communicate to visitors to the Gion District the appreciation for beauty that the area has always had, and will pass it on to future generations.